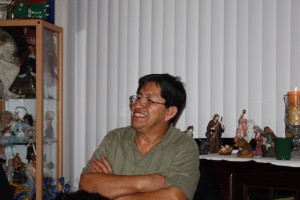 Ulloa is my father.  His story of struggle and overcoming the greatest obstacles has inspired thousands of people worldwide.  Although he passed away November 30th 2013, his lessons and legacy live on through his children and the people whose lives he touched.  I’ve decided to share many of the lessons he taught me in an effort to serve and also to heal wounds that I struggle with because he is no longer among us.  I don’t know too many people who have overcome being orphaned at the age of 8 years old in a third world country;  traveled to a foreign land to improve his family’s life;  started at the bottom and eventually achieved the American Dream.

When I was 12 years old, Galo asked me if I wanted to go to work with him the following day.  My father would wake up at 4:30 am to drive to work. Open up Lables Table Deli on Pico Blvd. at 6 am and work until 2 pm.  Then drive his van to his next job.  The famous Canter’s Deli in Hollywood, California would be his second job.  He’d have to find parking for his huge van.  Would take a nap for 1 hour then put his deli shoes and apron on to commence work at 5 pm.  He would work until 1 am (two 8-hour shifts in one day).  He’d get home around 2 am, sleep for a few hours then repeat the same schedule the next day.  He took Thursday’s off so he could be free to watch his kids play sports.  I watched my dad do this for his entire life. 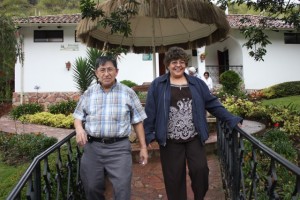 So when he asked me if I wanted to go to work with him the next day a big part of me was excited to spend time and be close to my dad.  The other side of me didn’t want to have anything to do with waking up that early and being on my feet for his first 8-hour shift.  He told me that, “Your mother will pick you up at 4 pm.”  I hesitantly agreed and that decision formed a great deal of my life for years to come.

It was a Saturday morning.  I would usually sleep in and watch TV for hours.  Waking up that early was so uncomfortable.  But after several wake up nudges by my dad, I got up and jumped in his van.  We headed on our early morning drive.  It was still dark outside and I sat shotgun.  Proud to be my dad’s side kick for the day.  It was a 45 minute drive and my dad would share what he expected of me.  He told me that he was grateful for his two jobs and it’s what has allowed him to put food on the table and clothes on our back.  He shared with me that if there was anytime I found myself with nothing to do, “ask me or Bruce and we will find something for you to do.  This is not a time to be lazy and sit around.  Bruce is going to pay you $20 for the day and you must earn your money.”  “You are going to wash dishes, wash fruits and vegetables, bus tables and many other things. You are going to get a lunch break for one hour, then come back to work.  We may also ask you to bring food to some of our customers tables who decide to eat in.  When you greet the customer smile and be very polite.  Our customers are the boss.”

Bruce was the Owner of Lables Table and one of the most generous and friendliest people I have ever met.  I didn’t know it at the time but Bruce made a huge exception for me, a 12 year to work at the Deli.  Turns out it’s against labor laws for 12-year-olds to work in that capacity in California.  My father urged Bruce to bring his son so that he can teach me the value of hard work.  Bruce later told me that, “Your father told me that he wanted to work you so hard that you never wanted to do hard labor.  He believed that you would study harder, get better grades so you can get a better job than he had.”  Sure enough, the strategy worked.  I worked my ass off for 8 long hours.  At the end of the day, I was beat.  I fell asleep in my mom’s car on the way home.  This began a pattern that we would do every weekend for many years.  As much as I hated going because of how hard it was a part of me loved it as well.

I felt valuable, mature, and connected to my father.  I was able to see life through his eye’s.  Whenever I completed a task I was given I would immediately move on to the next.  When I was not given another, I took the initiative and found something else I could do to be of value to the deli, to a co-worker, or to the customer.  The lesson of DO MORE THAN IS EXPECTED OF YOU has allowed me to achieve rewards in sports and in business that would have never occurred had I not learned this lesson and owned it. 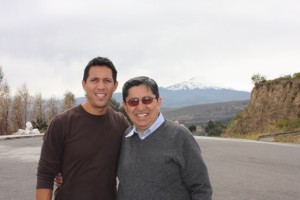 I applied this lesson in my basketball career.  A 5’8, latino has no business getting paid to play basketball.  But doing more than was expected of me in practice.  Shooting hoops when the lights were out.  Dribbling the ball while walking to school for blocks and out working everyone else allowed me not only to play college ball at a high level but got me a contract to play 5 years professionally in Australia.  This same lesson has given me financial success.  Always looking to see where can I add value to someone else’s life?  How can I do more than just my share today?  My father’s lessons have brought so much abundance to our family in more ways than just monetary.  We’ve also been able to contribute in ways we never thought possible.

What is something valuable that you learned from your parents or as a child that has positively impacted you in a big way?  How can you do more than what is expected of you today?  With your family, with your job, your business?

Leave a comment and share your story or lesson so we can all benefit from our life lessons as a group.