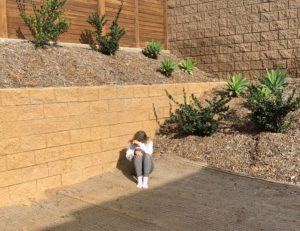 Recently we moved into a new construction home that was meant to be our dream home. It quickly become a nightmare for my wife and I. I found Yvette curled up in a ball with an excruciating headache when our Wifi was turned on. We were forced to learn about EMF’s and the invisible electric smog that is slowly cooking us, and most don’t have a clue.

After hours of investigating, researching and even calling in an EMF expert (we had no idea such a thing existed) we realized what the problem was. But as we have learned to exit the Matrix we didn’t feel sorry for ourselves and play the blame game. We took inventory of all the information we had available to us and began putting resources and solutions together so we can make our dream home a dream home and not a torture chamber.

Prior to moving into our dream home in San Diego, Yvette and I have been living at a treatment facility in Brazil. Yvette getting treatment for what Doctors deemed an incurable condition, Ameloblastoma. The treatment made Yvette hyper sensitive, and she is electro hyper sensitive which means she is extremely sensitive to the electric waves that emit from power lines, wifi, radio, tv, microwaves, essentially anything that has electricity and radio waves.

We hired Tim Wise to take inventory and teach us about what are EMF’s, and more importantly, to identify if and where these EMF’s were coming from and how to reduce and completely remove the radiation that has been linked to cause many chronic illnesses. Tim shared with us that Yvette is like a canary in a coal mine. Miners used to carry canaries in a bird cage to help detect Carbon dioxide which is an odorless, colorless gas that can kill humans when too much is taken in.

Here is some useful information to educate yourself with from our mini in home seminar with the EMF expert. 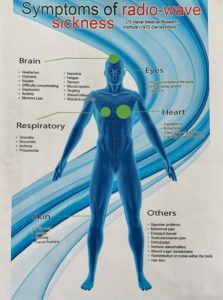 Some Symptoms of Radio Wave Sickness

How old is Electricity – 120-130 years old. Edison – electricity Tesla figured out how to use it in long distances, they monetized it. It’s never been regulated. Prior to we used oil lamps and Candles

Radiation Sickness – it’s gradual, most don’t feel effects but compounded over all the types of EMF’s and time. Example Nagasaki and Chernobyl – what was deemed safe zone, many years later many diagnosed with Illnesses related to radiation exposure.

Did you know Smart phones have 5 antennas

The best thing you can do is to get informed. Most won’t feel the effects right away but over time it’s kind of like cooking a frog. If you try and put the frog in boiling water, it will jump out right away. However if you put the frog in room temperature water and heat it up slightly eventually it will cook him. Sorry for the analogy but that’s what’s happening to our bodies and brains. Enough of the problem, here are some solutions that will help you with reducing. This is a good start and we will be sharing much more as we learn more.