0 shares
What it means to be a Warrior, a Queen, to be Unshakable! 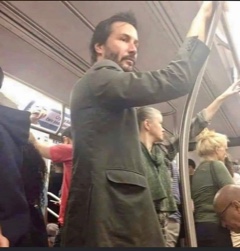 When we can know who we truly are.  When we  are not compromised by our perceived status, wealth or power.  It’s been said a true character of a person can be measured by observing how they treat others who cannot do anything for them or anything to them.
Keanu Reeves is a rare example of a person who has achieved the highest of successes in his field and in economics and yet has a heart to serve.  Despite his major challenges he has turned his pain into gain.  Many believe that the younger we experience deep wounds the more our gifts to the world can be accessed.
Enjoy this story.
This is Matrix movie star Keanu Reeves. He was abandoned by his father at 3 years old and grew up with 3 different stepfathers. He is dyslexic. His dream of becoming a hockey player was shattered by a serious accident. His daughter died at birth. His girlfriend died in a car accident. His best friend, River Phoenix, died of an overdose. His sister battled leukemia.
No bodyguards, no luxury houses. Keanu lives in an ordinary apartment and likes wandering around town and often seen riding a subway in NYC.
When he was filming the movie “The Lake House,” he overheard the conversation of two costume assistants, one crying as he would lose his house if he did not pay $20,000 – On the same day, Keanu deposited the necessary amount in his bank account. In his career, he has donated large sums to hospitals including $75 million of his earnings from “The Matrix” to charities.
In 2010, on his birthday, Keanu walked into a bakery & bought a brioche with a single candle, ate it in front of the bakery, and offered coffee to people who stopped to talk to him.
In 1997 some paparazzi found him walking one morning in the company of a homeless man in Los Angeles, listening to him and sharing his life for a few hours.
In life, sometimes the ones most broken from inside are the ones most willing to help others.
This man could buy everything, and instead every day he gets up and chooses one thing that cannot be bought:
👉To be a caring person.😍❤
Go out and Care today.